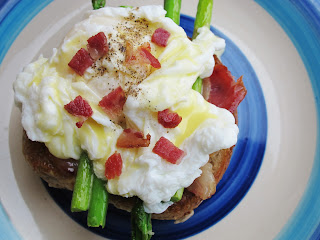 This dish is inspired by E. I asked her, how does she like her eggs? And without even thinking, she answered Egg Benedict! Well, because of her answer that day, I made this. As simple as that :) 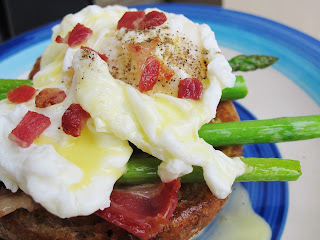 Recipe from here along with the tips and trick. I use a store-bought whole wheat dinner roll to make my life easier. There was some kind of disaster happened when I make the hollandaise sauce, I forgot to close the lid when I use my blender to mix the sauce. Fireworks happened in the kitchen that day. Except this was "Sauceworks" hahahahaha I guess my sauce here was too thin in attempt 1.0. There will be attempt 2.0 for sure :)

And I love how my poached egg turned out. It is not as hard as it sound. I was always intimidated to make perfect poached egg before. You only need the secret ingredient : lemon juice, or vinegar will works too.

It's a good thing your aunt has a nice built-in oven and she rarely use it. My cousins use it sometimes, though :) and out of nowhere, we decided to have a Cousins Baking Weekend. Yay~


We had a long talk that week before decided what to bake. Choices were brownies, apple crumble, cake pop, banana or carrot cake, scones, and many more. Then we tried to narrow down what we want to bake, Jw wanted to bake brownies because her son love it much, L wanted apple crumble because her colleague did a great job with apple crumble and she wanted more of it, C went with everything she can eat, and I can really bake anything cause I miss oven so much! But because of the time limit, I guess we can only choose two of them, so we go with apple crumble galette and banana quick bread.

#1 Banana Quick Bread
I got the recipe from Food Network Magazine, the article only gives you the ingredients proportion, not the actual recipe.
1 : Choose your fruit. We go banana!
2 : Choose your adds in. I bought my favorite nut, almond, and I still have peanut butter chip in the fridge that I brought along. Plus chocolate chip for sure!
3 : Prepare your batter.
4 : Mix mix mix. Pour the batter to the greased loaf pan.
5 : Wait for the Ding! moment

Well, turned out we got so much time to kill. After we finished putting the banana quick bread batter into the oven, we have to wait about 55mins. So Jw thought we can do extra cake, let's go for brownies! Fortunately, we have all the ingredients ready. 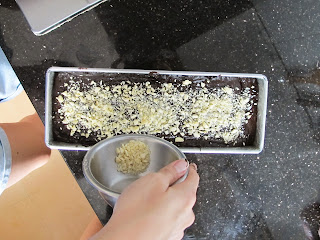 #2 Chocolate Brownies
I've made this before. And I realized just now, at this moment, that I never post it before. My bad. I just put some note in my recipe book that this recipe makes a wonderful brownies, it is crisp on top, but fudgy and chewy inside. My kind of brownies. I got this recipe from ZoomYummy.

Last time I made this, I baked it in 20cm x 20cm pan. It came out perfect. But this time, I didn't know what's wrong. Was it the pan? The heat of the oven? Or in the process of making the batter? But it came out wrong. It's still undercooked in the middle. The batter was still runny, even after we cooled it down. So we put it back in the oven for more half an hour . But I guess it's too late. Well, we managed to cut the cooked sides. It still tasted great, the problem was only in the texture. 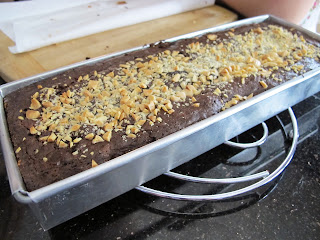 Ding! moment for banana bread. The result : it was wonderful. The exterior was crisp and flavorful, while the interior was so moist and the peanut butter chip really makes this quick bread one level up! 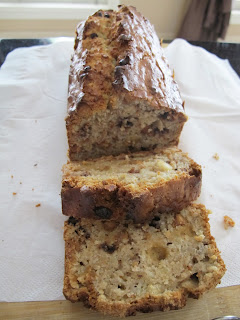 #3 Apple Galette Crumble
Now, this one, I've made it before, and I've posted it too. This recipe is a combination of two recipes : Cinnamon Apple Galette and Apple Crumble Cake. I just added the crumble thing from the latter recipe to the galette. Unfortunately, I forgot to take photos of this one :( But you get the picture, crumbles on apple galette.

After this, I hope there will be more Cousins Baking Weekend!


Talking about banana, who doesn't love The Minions from the movie Despicable Me? I looooovee them so much. There will be Despicable Me 2 in July 2013. Have you watched this video? I love it so much, now it's set as my ringtone :D

Experiented by Eugenia N.L. at 1:41 PM No comments: 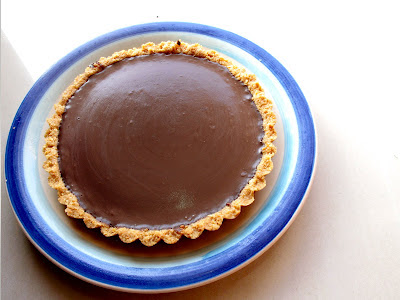 I'm still looking for a new oven. So it's been like 5 months I didn't bake anything. But that doesn't stop me for making sweets. Well, a bit, since I can't make cookies. But I can make tart! A no-bake tart. A chocolate tart. Sure is sweet :)

I come up with this tart from so many resources, and try to merge them to an edible tart. 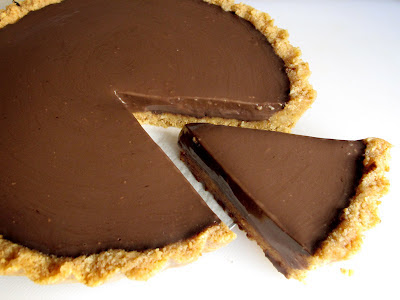 For no-bake crust
About 180gr digestive biscuit, I use sari gandum
6 tbs butter
6 tbs maple syrup
4 tbs sugar (you can adjust the sweetness according to the biscuit you use, mine was rather plain so I use extra sugar)

For the chocolate ganache
300 ml chopped dark chocolate (you read it right, it's in ml. I chopped the chocolate in small pieces and put it in measuring cup)
250 ml heavy cream
pinch of salt

Crust :
1. Line the bottom of 8" springform pan with baking sheet. Set aside.

2. Melt the butter in a small bowl using microwave while you crust the biscuit into crumbs. Let it cool a bit.

3. In a medium bowl, combine the biscuit crumbs, melted butter, maple syrup and sugar. Mix until the crumbs are moistened and in a crumbly paste form. Transfer the crust onto lined springform pan. Level and press to the bottom of the pan about 0.5cm thick using hand or spatula and neatly taper at the edge.

4. Cover with plastic wrap and place in fridge about 3hours or until you get the filling ready. Can be stored for 2-3 days.

Chocolate Ganache
1. Chopped chocolate in small pieces and put it in measuring cup to more or less 300ml. Transfer chocolate to big bowl and put a pinch of salt in it too.

2. Heat the heavy cream in sauce pan, just until it start to boil. Slowly pour it to the chocolate bowl. Let it steep for 5 mins.

4. Pour the chocolate ganache to the prepared crust. Allow the tart to cool in room temperature before you chill it in fridge. 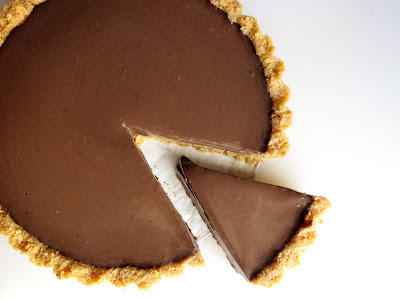 Eugenia N.L.
I feel zen when I bake. Butter is my favorite aroma therapy.